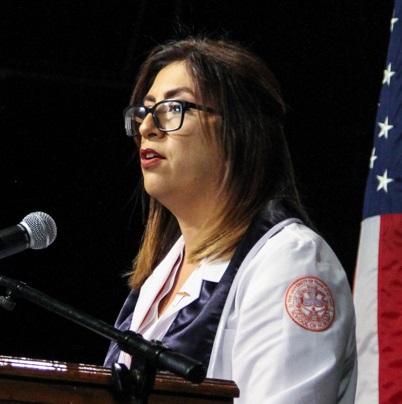 Andrea DeMay was born and raised in El Paso, Texas. She and her family call El Paso home. She is married and has young daughter that was born with severe genetic physical abnormalities. Over a span of six years, Andrea was unable to work or go to school full-time. They spent months in and out of hospitals here in El Paso and in San Antonio. Her young daughter was very sick and during that time had to be resuscitated multiple times. One of those times, Andrea performed the resuscitation. This was her very first time.

They made it back to El Paso and her daughter’s condition had stabilized. Andrea managed her daughter’s care full-time, but money became increasingly tight. They’re entire life savings was spent during the time going back and forth from the hospitals. They stayed at Ronald McDonald houses and had become desperately reliant on family.

Andrea was overwhelmed with medical issues, marital problems and a very real financial burden. She prayed how they would get through the week. As she contemplated, she came to the realization that all of her life she has taken care of people. This care escalated when her young daughter became increasingly sick. During Andrea’s visits/stays at the hospital, she learned to read labs, make valuable contributions to rounds, and she developed productive relationships with her daughter’s 16 healthcare providers and their teams. It was at that very moment, Andrea realized she wanted to become a nurse.

The very same week, she signed up for all of her pre-requisite classes – a maddening 19 hours in one summer! She pushed through her classes and was soon accepted into the nursing program at the University of Texas at El Paso (UTEP). However, money had become a real obstacle, yet she accepted her seat in the nursing program and attended orientation. This is where she heard about Project ARRIBA.

Andrea applied and went through the enrollment process. That is when she met Mimi Duran, her case manager. Mimi’s compassion and dedication helped Andrea overcome life’s hurdles. For Andrea, that is what Project ARRIBA was about – believing in one’s dreams and facilitating a path to get there. Project ARRIBA not only helped with tuition, books, uniforms, etc., but it is the moral support from staff that helps students make it through school. If there is a problem, a case manager is always available.

Once Andrea graduates and gets her nursing license, she will be able to do her most positive work. Her future and that of her entire family is much brighter. Not only will she be financially secure, but she will be able to make the best medical decisions for her daughter. She also looks forward to helping countless other families as they work through life’s ordeals such as the one Andrea and her family had to experience. Andrea graduated with a Bachelor of Science degree in Nursing is now working at Las Palmas Medical Center as a Registered Nurse earning $51,000 a year.