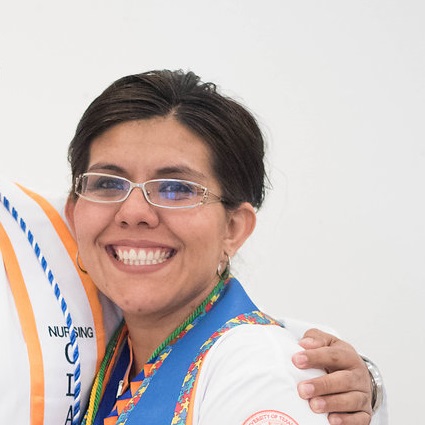 Jessica, the youngest of three children, had a simple upbringing. Her father worked in construction and her mother was a homemaker. She graduated from high school, married and had two children, one of whom was diagnosed with special needs. With no post-secondary education, Jessica worked as bus driver to earn additional income for her family. And after ten years, the marriage ended and Jessica was left trying to figure out how she would provide for her children. This was impetus of her returning to school.

From early on, Jessica knew that she wanted to work in the healthcare field and help those with mental health problems as the issue reached close to home. Realizing this dream proved difficult as financial hardships were encountered, resulting in the eviction of her and her children from their apartment. And at the age of 30, she was living back with her family. But she remained determined in completing her education. Soon after these setbacks, Jessica was accepted into the Registered Nursing program at the University of Texas at El Paso. She was elated to have been accepted into such a coveted program, but also overwhelmed with the cost associated with nursing school and providing for her family at the same time.

Jessica learned of Project ARIRBA from a classmate, quickly applied to the program, and was accepted for sponsorship. The program assisted her with a variety of support services to remove barriers from her training and increase her chance of success. These services included tuition assistance, course textbooks, medical uniforms and nursing kits, as well as other items required for the successful completion of her training. Her case manager, Herminia “Mimi” Duran, was a constant source of motivation and encouragement and helped her mitigate barriers through her educational journey. Jessica went on to become Class President, 21st Century Scholar, and made the Dean’s List.

Jessica graduated in May 2017 from the nursing program at UTEP and quickly passed the state nursing exam to become a registered nurse. She is working at DaVita making over $55,000 a year. Her long-term goals include pursuing her master’s in nursing and becoming a certified sexual assault nurse examiner where she can work in forensic nursing.