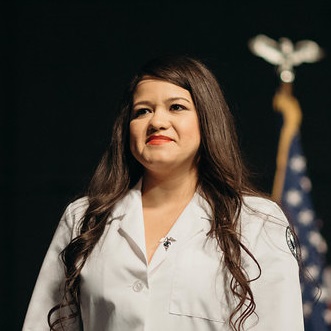 Belinda Atienzo was born and raised in El Paso’s Segundo Barrio. She graduated top ten percent of her class at Bowie High School, and began college at NMSU, pursuing a degree in nursing. However, due to financial struggles, she was forced to come back home with her parents. With determination to continue her journey, Belinda immediately transferred to EPCC. Working as a tutor/note-taker at the EPCC Center for Students with Disabilities, Belinda would save money to pay for summer tuition, books, and supplies.

In 2014, while struggling to pay for courses and requirements for the nursing program, she learned about Project ARRIBA, began the application process, and got approved. With Project ARRIBA’s 360° wrap-around support services, Belinda was able to completely concentrate her efforts in school. As she encountered struggles, she also found an amazing support system within her case manager, Priscilla Estrada. In 2016, Belinda’s father, one of her biggest supporters and the household’s sole provider, became very ill. On top of that, the only working family vehicle had just been stolen. This was not only a devastating moment for the family, but it also created a great deal of stress. That same year, Belinda’s grandmother was diagnosed as terminal and passed away. Throughout it all, Belinda did not feel alone, as her case manager was always there encouraging her to keep going.

In Spring 2017, Belinda graduated from EPCC as a Registered Nurse. As of September 2017, she is employed at El Paso Behavioral Health Systems, earning an estimated $52,000/year. Graduating meant not only financial security for Belinda and her family, but also the opportunity to give back to her community.