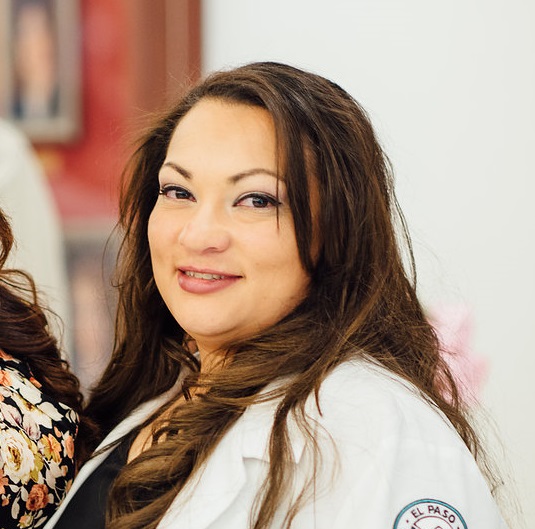 Rachel Montiel-Gravlee was born and raised in central El Paso and is a second generation Austin High School graduate. After finishing high school, Rachel enlisted in the Army, finished her time in the service, and enrolled at Kaplan College to train to become a medical assistant. However, wages as a medical assistant were too low and she soon went back to bartending full-time and attending school on a part-time basis.

Rachel heard of Project ARRIBA from two family members who were also Project ARRIBA participants. She struggled with the idea of whether to continue with her education or not and hesitated in applying. Rachel completed two more semesters before deciding to leave school altogether to work full-time to sustain herself. A few years later, Rachel met her husband and they were blessed with a daughter. It was at this point she decided she needed to return to school and enrolled into the Project ARRIBA program.

Over the next several years, Rachel had the opportunity to work with different Project ARRIBA Case Managers and other staff, all of who were very supportive and patient while she worked to complete her coursework. March 2014, Rachel attempted her first try to rank into the healthcare professions, unfortunately, she missed earning a seat by ½ point. Rachel was devastated but she persevered with her studies. Pregnant with her second child, she finished the CNA program and began preparing for her second attempt to rank. This time she was successful!

In 2016, Rachel graduated from El Paso Community College as a Surgical Technologist. With Project ARRIBA’s intense case management and wrap-around support services, Rachel is now equipped with the knowledge, skills, and abilities needed to attain meaningful employment. Rachel has a bright outlook on life. She no longer relies on government assistance and can now provide for her family and spend time with her children. Rachel is eager to give back to her community and the program that provided her with the educational, financial and social support system needed to realize her dream of self-sufficiency.