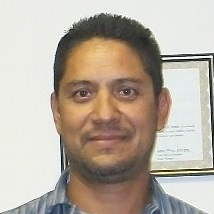 Born and raised in Mexico, Rogelio Calvo is the oldest of three brothers and one sister. Prior to becoming a U.S. resident in the early 1990’s, Rogelio worked in the medical field in Mexico. However, due to the language barrier encountered upon his move to the United States and the inability to transfer his foreign credentials, he realized it was necessary for him to enroll in English as a Second Language (ESL) courses and complete a postsecondary degree to provide for his family.
He heard about Project ARRIBA while attending ESL courses at El Paso Community College (EPCC) and was motivated to apply to the program. After applying to the program and completing the six-step enrollment process, he became a sponsored participant in August of 2008. Rogelio completed ESL courses and immediately transitioned into Project ARRIBA’s Workforce Development Academy (WDA) to prepare him for college level courses through its intense remediation approach.
Upon completion of the WDA, he continued his education by enrolling in basics, college level-courses, and then pre-requisites for nursing at EPCC. He was accepted into the nursing program in 2013 and graduated as a Licensed Vocation Nurse in spring of 2016. Rogelio resides in El Paso County with wife and two children. He currently works for the El Paso County Jail and earns a family sustaining, living-wage of $18.55 per hour.