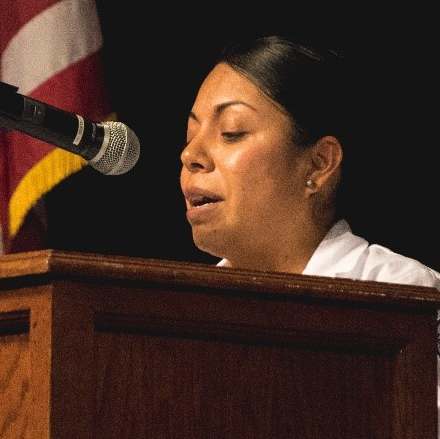 Maria Rendon was born in Reynosa, Mexico, and raised by her maternal grandparents in the small town of Rio Grande, Zacatecas.

When she was 10 years old her mother brought her to the United States in search of the American Dream. A new culture and language proved to be a barrier. Maria had a difficult time in school due her limited knowledge in such basics as math, science and history. Her limited English speaking ability proved to be an even bigger barrier and eventually she dropped out of high school in the 11th grade.

Soon after, Maria married and had three children. Eventually she would teach herself to speak English by watching kid’s educational television programs and practicing with her kids. Maria was a stay-at-home mom while her husband worked but they lived paycheck to paycheck and on government assistance. Their current way of life afforded them little hope for a brighter future.

Maria heard about Project ARRIBA at an outreach session held at her children’s elementary school. She was empowered with the resolve and the vehicle to change her life through Project ARRIBA’s workforce development efforts. With Project ARRIBA’s support, Maria was able attend school. The program provided her with the educational, financial and social support resources she and her family needed to keep moving forward despite life’s adversities, which at times seemed overwhelming.

Much to everyone’s delight, Maria is the first woman in her family to earn a college degree. Her achievement has also encouraged her children to pursue their own educational goals. As April 2016, she is a Registered Nurse working for University Medical Center making over $50,000 a year! Maria will now be able to provide for her family and care for people in her community. Maria is a proud Project ARRIBA Graduate, Class 2015!