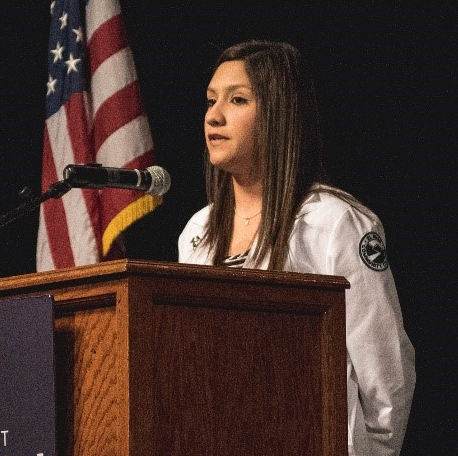 Deborah Diaz was born and raised in El Paso, TX. After graduating from high school in 2008 she enrolled at the University of Texas at El Paso (UTEP) that same year. However, Deborah was not able to continue at UTEP due to a mental health condition and severe depression.

In spite of this, Deborah knew that education was key to financial independence. In 2009, Deborah enrolled at a for-profit college as a medical assistant. She completed the program but could not find a job. Instead, she was left with a $15,000 debt. She began working at a bakery to support her small family. But no matter how many hours she worked, she could not get ahead and working long hours allowed her little time with her young daughter. By 2012, Deborah re-enrolled at El Paso Community College with two classes, but struggled to stay motivated while trying to complete her basics. She heard about Project ARRIBA from a fellow classmate and decided to learn more about the program. Deborah initially met with Isela Loera, who would later become her case manager. Ms. Loera provided Deborah with the insight needed to spur Debra on in attaining a degree and, ultimately, meaningful employment.

Once accepted into the program, Project ARRIBA assisted her with school expenses that included tuition, books, and materials. Ms. Loera also never left her side and has been a constant source of motivation and encouragement even in times Deborah thought she could not go on. Despite Deborah’s many hurdles, she graduated as a Licensed Vocational Nurse with Project ARRIBA’s support. She now works at Lamina Home Healthcare earning over $37,000 and will be pursuing her RN degree.