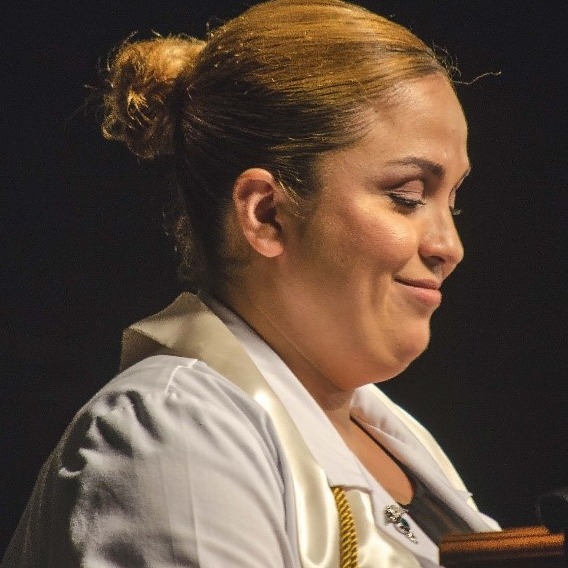 Angelica Pedregon was born in Tacoma, WA but moved to El Paso, TX at a very young age due to her parent’s military career. With an interest in healthcare, Angelica completed a Medical Assistant (MA) Certificate. In spite of her work as an MA, she still lived paycheck to paycheck and received government assistance. She knew there had to be a better way to support her family.

Angelica considered the possibility of returning to school, but the difficulty of paying for school, the demands of schoolwork, and balancing work while still making time for her children overshadowed her dreams. After the birth of her third child, she heard about Project ARRIBA. Inspired, she researched the program and quickly applied. Angelica met with Mr. Roman Ortiz, CEO of Project ARRIBA, who interviewed her and outlined the tough nursing program at the local junior college. Although he recognized her fear, he also recognized her resolve to improve the quality of life for her and her children. Angelica was promptly accepted into Project ARRIBA and started the Registered Nursing Program at El Paso Community College. Project ARRIBA provided her with the financial support she so desperately needed to attain her degree. Her case manager, Isela Loera, was a constant source of motivation even on days she faltered and feared not completing her degree.

As of June 2015, Angelica was job placed as a Registered Nurse at The Hospitals of Providence, Sierra Campus earning over $48,000 a year. She plans to continue her education and become a Nurse Practitioner and pay her gift forward by working in the El Paso community and helping the underprivileged.