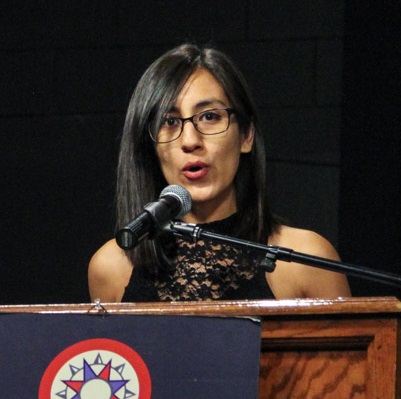 Diana Esquivel is from Gomez Palacio, Durango Mexico. She moved to El Paso, Texas, six years ago after graduating from law school in her home town. Despite her degree and inability to speak English, she was not able to find many job opportunities in the U.S.

Realizing this challenge, Diana enrolled into English as a Second Language (ESL) classes. Her English teacher recognized her quick progress and during her second semester suggested she enroll at El Paso Community College (EPCC) and pursue a career. Unsure of a transition into college, Diana enrolled and applied to the Physical Therapist Assistant (PTA) program at EPCC.

At EPCC she was instructed to complete needed pre-requisite courses in various subjects in order for her to apply to the PTA program. This proved difficult for Diana due to her limited English ability but nevertheless, she persevered with fierce determination and come fall 2016 she was one of 14 students to be accepted in to the program.

A major obstacle now presented itself, how would she manage to work and study an intense program at the same time? Diana did not qualify for financial assistance to cover her school expenses due to her previous academic degree in Mexico. Fortunately, an EPCC counselor told her about Project ARRIBA. Through the Project ARRIBA program, her dedicated case manager, and wrap-around support services, Diana now had the opportunity to accomplish her goal of earning a degree in the U.S.

During the program, Diana experienced a couple of life changing events; both positive and negative. Choosing not to focus on the real possibility of having to leave school in her first year, Diana found the support she needed through her loved ones and in her committed case manager. Priscilla Estrada, Case Manager III, provided her with the resources Diana needed to get through school and she was a constant source of motivation throughout her educational journey. This fueled Diana with a real sense of determination and persistence that helped her achieve her goal of earning her associate’s degree as a Physical Therapist Assistant. Working as a PTA will provide her the opportunity to work in a field she loves and to become financially stable. In fact, as a PTA she now works for Therapy Consultants earning $73,000 a year! Diana also plans to give back to her community in pro-bono services, educating people on physical therapy and to donate back to Project ARRIBA. She plans to become a clinical instructor in the future.