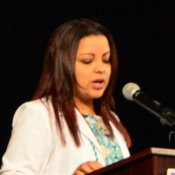 Prior to enrolling in Project ARRIBA, Margie worked at a local medical practice where her boss, Dr. Ugarte, boldly inquired if Margie had ever considered becoming a nurse. The idea of going back to school was daunting and seemed hopeless, especially because Margie was a single mother of two and needed to work to support her family. Nevertheless, she trusted Dr. Ugarte and the idea that he believed in her was motivating for Margie. Word of mouth pointed Margie to Project ARRIBA where she applied and, in time, became a participant. Initially, Margie was not funded as a result of her living outside the city limits, since there was no funding available for county residents. After funding became available, Margie was accepted into the program, and eventually moved into the city limits. Margie was supported by her case manager, Isela Loera or, as Margie describes, “her fairy godmother and angel”. Isela ensured Margie would not fail, encouraged her when she needed it most by replying to late night emails, and even troubleshooting solutions when Margie lost childcare for her children. Through it all, Margie never felt alone. Project ARRIBA provided both emotional and financial support. In May 2014, Margie completed her training at EPCC and was hired at the Surgical Unit of University Medical Center of El Paso, Project ARRIBA’s employer partner. Now earning over $46,000 annually, she is able to provide for herself and her family and is contributing to El Paso’s economy.