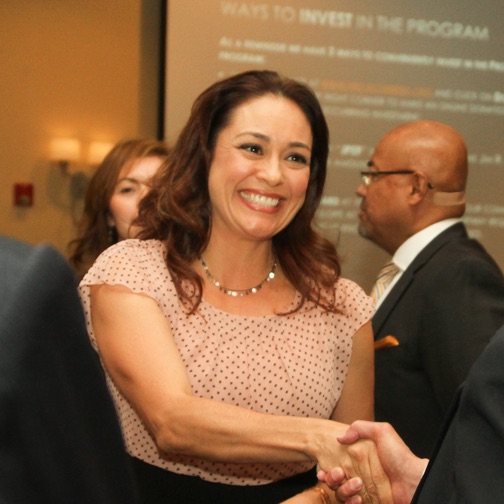 Kristie Darlene Reyes was born in El Paso, TX. Her parents divorced when she was young and her mother moved to Florida— where Kristie spent her summers. When her father re-married, Kristie’s home life became difficult and abusive; and she found herself on the street at age 17. Kristie had gone from being a straight “A” student with prospective hopes of joining the Air Force Academy, to leaving her senior year of high school- just two months shy of graduating and working two jobs to sustain herself on her own.

A year later, Kristie became pregnant. She was able to complete her high school diploma by taking summer classes. Her daughter was 8 months old when Kristie earned her diploma. Despite the lack of support from her family, Kristie was determined to get ahead and enrolled at El Paso Community College (EPCC). She joined a work-study program at EPCC where she worked in public relations and attended classes in the afternoon. Kristie’s daughter was enrolled at the daycare on the college campus.

After a few years of this routine, 20 hours of minimum wage wasn’t cutting it. Kristie started bartending and waitressing for better money, however this lifestyle put her education on the back burner. Soon after, Kristie entered what seemed a promising relationship and was now fueled with dreams of starting and running her own catering business. Nonetheless, two years later, the relationship ended and now she had twin boys. Without support, life was difficult as a single parent with three children in tow. In spite of this, her kids fueled her with the desire to continue with her education. Kristie found determination in the eyes of her children and persisted—scoring A’s in science. Kristie’s English courses trained her to vet her story of struggle and determination.

Before long, Kristie heard about Project ARRIBA and she learned the program assists individuals with difficult circumstances in obtaining a college degree. She made an appointment and began the application process. Kristie was still working towards completing her pre-requisites for the nursing program and soon after, received her acceptance letter.

Her energy was contagious! Kristie’s daughter would stand with over 175 index cards and flash them to Kristie as she washed dishes and did laundry. Little did Kristie know this would set a foundation for her and her children’s education! Her two case managers, Rose Bonar (who lost her battle to cancer in 2010) and Estela Flores, provided her with the caring support and motivation Kristie needed to thrive and complete the intense nursing program. In addition, Project ARRIBA also assisted her with the cost of books, daycare and other support needed to realize graduation.

Kristie finished the nursing program at EPCC and passed the boards on her first attempt. She applied to The University of Texas at El Paso’s (UTEP) nursing program and soon after graduated with her BSN, a 4.0 GPA and three exceedingly proud children! Today, Kristie specializes in high-risk labor and delivery and works toward making a difference in the lives of young women. She also volunteers for an indigent afterschool program in the Socorro Independent School District as a coach for poverty-stricken kids. She coaches them to believe in themselves and to exercise their inner strength. Additionally, Kristie works with Aliviane to counsel women who suffer from abuse, addiction, and are pregnant.

Kristie is currently applying for the Family Nurse Practitioner program at UTEP so that she can work in our community with homeopathic medicine and women’s oncology. This will be Kristie’s third degree! Kristie’s daughter is currently attending Texas Tech in Lubbock and is working towards a Physician’s Assistant degree. Her daughter is in the honor’s program and has a 4.0 GPA. Kristie credits Project ARRIBA’s support as a pivotal piece to her and her family’s success in realizing her dream of acquiring a higher education degree and achieving greater economic mobility.