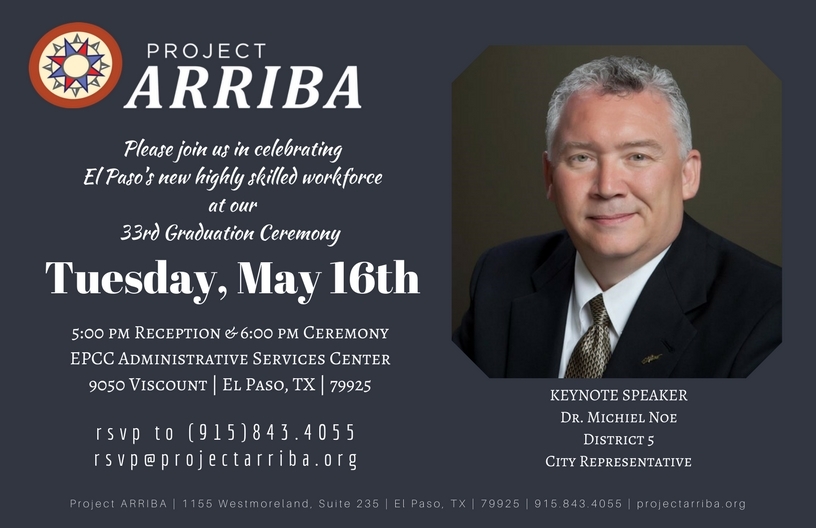 About our Keynote Speaker

Dr. Michiel Noe has served the citizens of El Paso for the last six years as Representative of District 5. Dr. Noe, born and raised in Odessa, Texas, arrived in El Paso in 1991 to complete his residency at Texas Tech School of Medicine. Upon graduating from medical school in 1993, Dr. Noe remained on staff at Texas Tech until 2001 when he opened his private practice in East El Paso. Dr. Noe currently practices at The Hospitals of Providence East Campus, where he was a founding member of its Executive Committee, has served as its Chief of Staff, and, currently, is a member of its General Board of Trustees. Dr. Noe also serves as the Chair of the American College of Obstetricians and Gynecologists, District XI, Section I (West Texas).  In this position, he is honored to advocate for women’s health issues both in Texas and in Washington DC.

Dr. Noe has been a staunch supporter of Project ARRIBA since taking office and was instrumental in the approval of the $1.5 million, five-year Impact Fund contract between the organization and the City of El Paso in 2013.  Other notable accomplishments during his tenure include: Securing funds for the development of two major parks in East El Paso, developing a strategic plan to combat the high euthanasia rates and low live release rates at Animal Services, the creation of the Social Host Ordinance to help prevent underage drinking, secured millions in federal funding for the region’s infrastructure and transportation needs, and connects regularly with his constituency by holding Community Meetings.

Dr. Noe is a graduate of the Neighborhood Leadership Academy, and is a member of The Rotary Club of El Paso.  He and his wife Elizabeth have five children.

The mission of Project ARRIBA is to provide high-skilled training to El Pasoans who need the occupational skills necessary to access jobs in demand occupations that pay a family-sustaining living wage, with benefits and a career path.

Project ARRIBA promotes a working partnership between community-based organizations, training institutions, and private corporate partners. Serving the El Paso community for over 18 years, the organization continually demonstrates the substantial social and economic benefits that can be achieved for those who otherwise would not have the opportunity.